A much needed break is on its way! I can't believe for the first time ever I have a job that I don't have to "request" off for the holidays! I love it!!!!!
So, we've had a rough week. Kaden had his surgery on Wednesday last week. For about 5 days he felt horrible and made sure to let us know. I stayed home with him Wed and Thursday. Tony stayed home on Friday. Poor baby! He just wanted to be held those day s and all weekend. So, that's what we did...we held him!
He went back to the sitter on Monday and played outside for the first time in 6 days. He seems to be feeling better! I'm tired though and ready for my holiday break!
I will post some pics from Thanksgiving soon!
Have a Happy Thanksgiving!

Posted by tpillstrom at 1:07 PM 0 comments

Boy, am I tired! Between myself and Kaden both being sick this week, I'm pretty worn out! Where do I start? As you are well aware, crazy weather means sick for those of us who suffer from allergies! So, this week I successfully lose my voice by Friday. It's really hard to teach talkitive students when you can't be louder then they are! However, I did have a few nice students who tried to teach for me! Funny how when I'm teaching they don't have a problem talking but when it's them at the front of the class, they get so mad when everyone is acting up!
Next, on to Kaden. Well, we all know that he has been sick since he was born. So, last night he woke up coughing and threw up all over the place. Nice! So, we get him cleaned up...aka bath number 2... and put him in the bed with Brady. An hour later, he wakes up coughing again....and yep...throw up! Bath number 3! Tony and I traded off all night who got to sleep holdinghim! Not fun! He was pretty under the weather today and didn't eat much!
Oh....I do have great news...Kaden used the big potty today to "Tee Tee"!!!!!!!! He loves to sit on the big potty but never goes! Tonight he went and we made a huge deal about it! Hopefully he'll do it again tomorrow! I'll keep you posted!!!!

The Halloween post has finally arrived! Halloween lasted almost a week here at the Pillstrom house. Saturday, after attending 2 birthday parties...see April's blog for info on one of them...we went to a Halloween party with the college kids. Brady wanted to wear his costume so it was a trial run on the mummy. Ok...needless to say...I had a lot of work ahead of me. So, Sunday we went to a party with our small group! The kids looked great. Kaden was a clown and Brady wore the mummy again. Ok...try two was a bust. But he had fun. 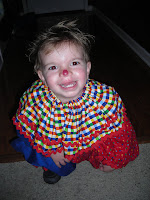 This costume that Kaden's wearing is one that I made for Brady when he was one. I love it and Kaden looked so cute! He was so proud of himself! 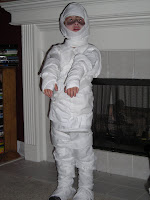 This was the first pic of Brady in the mummy. He looked a lot better by the time we made it to Halloween night! 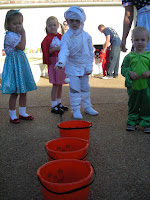 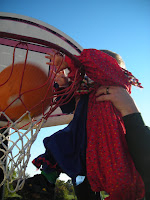 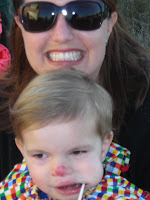 Look at my sweet baby boy! He loves suckers and of course he is super excited about all the candy he got Halloween. 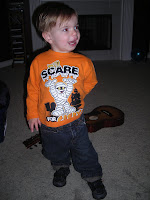 Ok...so this is Halloween day. The boys wore their shirts that Gamma had bought them. Brady got to wear his pirate wig because it was pirate day at school. It matched his shirt really well! 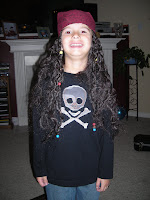 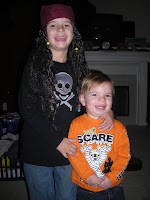 At school on Wednesday, the preschool kids came trick or treating to the class rooms. I totally had to post a pic of this little girl! She is Dora the Explorer and I thought she was too cute! 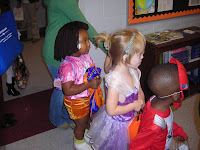 Halloween night we went to Whit Bright's house. There were several of our friends there. Teresa and Sean brought a trailer with hay bails. We had the best time. 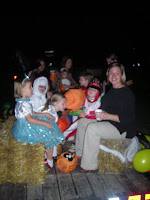 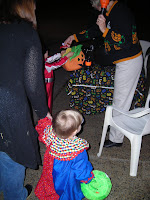 Kaden loved trick or treating. He was so cute sticking out his bucket to get candy! He racked up and had a blast. 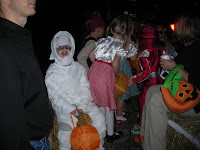 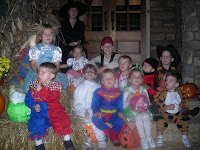 Brady cracked us up all night. He was the first kid off the trailer and the first to the door each time. Here's a cute pic of all the kids that went trick or treating with us. I have to say this was probably the most fun we've ever had on Halloween. Thanks to Whit for having us over that night!

Posted by tpillstrom at 9:14 PM 1 comments