I know I just posted my vacation pics but I had time and wanted to add today's event! Kaden got his first haircut today and he did great! I've been putting it off for so long because I didn't want to loose his curls. But he was looking scraggly and Tony said it was time. I was so afraid he would cry and it would be a disaster. He did great. Brady went first so Kaden thought he needed to be a big boy too! He looks so grown up it makes me tear up every time I look at him! 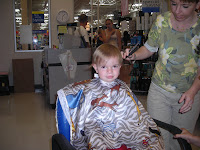 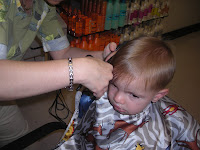 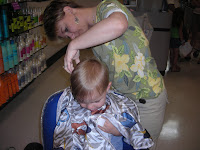 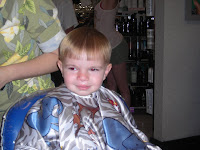 Ok...it's been forever since I've blogged. But I have a freshbatch of pictures to make up for it! We just got back from vacation in Texas. It was a great trip! There were six of us...me and the boys, Teresa and Mackenzie and April Satcher. We had a busy six days. 15 hours there was trying with three kids, but none the less we made it alive. First day included lunch at my brother's restaurant and a trip downtown. Of course it never rains in Texas until we decide to take a trip there. 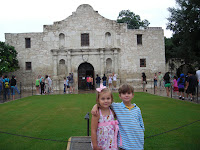 Brady and Mackenzie infront of the Alamo.

Of course every trip to San Antonio includes a trip to the famous battle ground. Kaden was asleep during this part of the trip. I'm sure he's really sad he missed it! Brady said it was boring and the fact that we were getting rained on didn't help. Teresa and April liked it though. 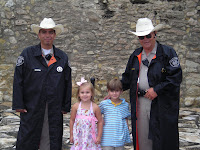 Texas police officers at the Alamo. They were acutally wearing real cowboy hats. 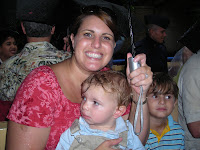 Next we took a boat trip down the river walk. We had to buy unbrella's while we were inline because it started raining really hard. But the show must go on and they still let us ride. We were soaked but it was still fun! 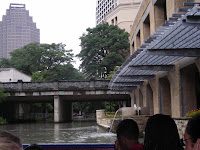 One of the many views of the riverwalk. This was after it stopped raining and we put our umbrellas away.

So now it's off to the beach. We went camping with my parents and spent Saturday at the beach. It was raining at first and really cloudy. But then God showed off and the sun came out. We all got a really good tan except April, She was burned pretty bad. The next few pictures are of our day at the beach. 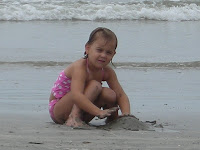 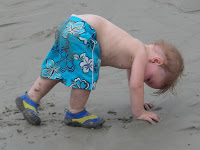 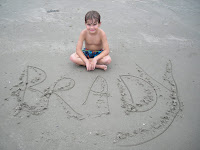 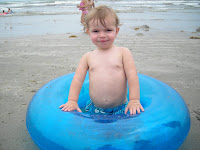 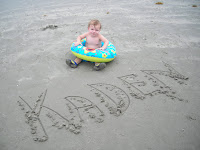 I stole this idea from April and I just love it! The boys looked really cute with their names in the sand. Kaden had a blast at the beach. Last year when we went, he wasn't old enough to enjoy it. If you remember the pictures, he just slept the whole time. But not this year. He loved playing in the sand. He didn't care much for the water which is not in his character. He loves the water but I think he just didn't care for the waves. 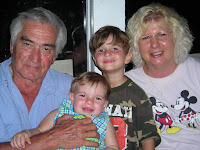 Here the boys are with mom and Jim at the restaurant. Brady tried squid for the first time. He loved it until I told him he was eating Squidward. 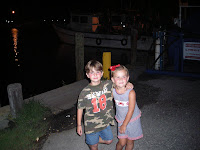 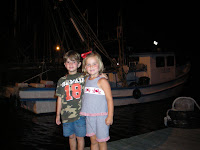 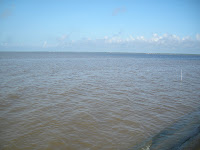 This is the view from outside of the camper where we stayed. I could wake up tos this view everyday! I love camping at the beach. 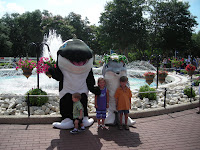 And now for the grand fanale. Sea World! We love this place! Here the kids are with Shamu and a dolphin that I don't know her name. I thought Kaden would be scared like most kids his age of these kinds of things...but not my kid! He loved them! He kept sitting on Shamu's fin and just laughing! Then when it was time to move on he threw a fit! He wanted to hang out when them all day I guess. 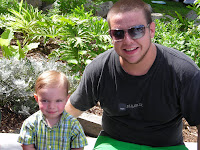 Kaden and his best buddy Uncle PJ. They were best friends at Sea World. And boy and I glad! It gave me a much needed break from the little momma's boy he's become! 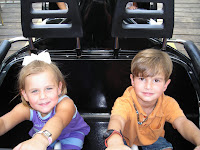 Brady and Mackenzie on the Shamu Express. They loved it but the lines were pretty long so we only got to ride it once. 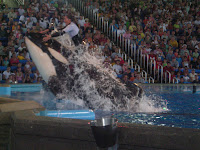 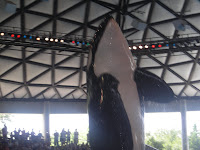 Everyone loved the Shamu show...even Kaden who doesn't like to sit for very long. He clapped and yelled like all the other kids. He was having a blast until we got soaked in the splash zone. He didn't care too much for that part! It was nice though because it was really hot.

In all we had a great trip! It was nice to have friends with me the whole time. We spent a lot of time talking and I really feel like April, Teresa and I have gotten a lot closer! It was also nice having a friend for Brady to play with! It made it a lot less tiring for me since Tony wasn't there. I can't wait to go again next year!

Stay tuned...the first day of school is approaching as well as Brady's 5th birthday! I'll have lots more to blog in the near future! Until then...have a great end of you summer!

Posted by tpillstrom at 9:28 AM 0 comments

We've had a pretty busy couple of weeks. As you already know I lost my job a few weeks ago. Well, since then the boys and I have been living it up! Let's see...we've been swimming, tubbing at the lake, traveling, you name it! I have been enjoying my time off. This week I should hear about my test scores and about the job at Lewisburg and also I have another company interested in me for a sales job. I'm pretty excited about them both. I'll keep you posted about that. Now to the pictures....... 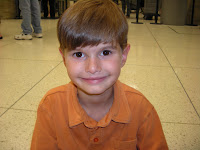 Brady waiting at the airport for Kierra to return from Brasil. 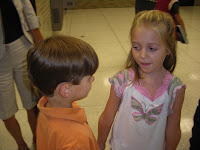 Brady and Kierra. He was shy and she was really tired. 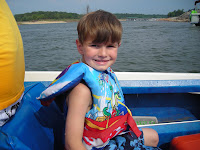 Brady at the lake. He went tubbing with daddy. 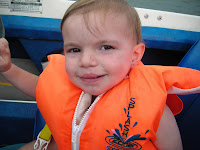 Kaden's 1st trip to the lake! He liked driving the boat best. 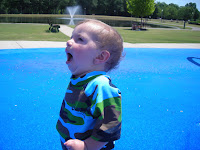 Kaden at the water park in Collierville.

Posted by tpillstrom at 4:41 PM 0 comments